Here is a proposal for the redesigned Tri-State Pregnancy Logo 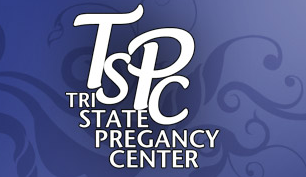 I use mostly the Google Web-font library for my website design, so I decided to test the wording out with these 2500 or so fonts. I really liked the more informal fonts, but hopefully we all know that the readability of the logo gets sacrificed tremendously when we choose a handwritten or script font face. So I knew I had to be careful and ended up using a savoy LET plain 1.0 for the script face. I also liked Alice and lowan old-style for their simplicity and legibility. I finally went with Della Respira because I like the smaller more modern feet of the serif and the roundness of the capital "C" and the width of the capital "T". I also liked the way it went well with a triangular shape because of the angled counter on the lowercase "e" and the angle of the slanted descender on the lowercase "y".